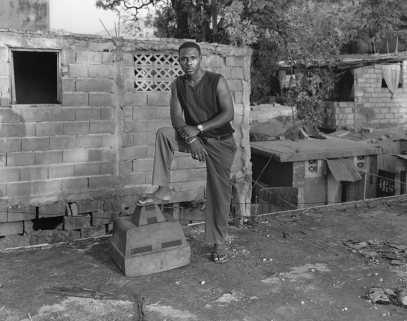 Light Work is pleased to announce that the recipients for the 39th annual Light Work Grants in Photography are Laura Heyman, Jared Landberg, and Janice Levy. The Light Work Grants in Photography program is a part of Light Work’s ongoing effort to provide support and encouragement to artists working in photography. Established in 1975, it is one of the longest-running photography fellowship programs in the country. Each recipient receives a $2,000 award, has their work exhibited at Light Work, and published in Contact Sheet: The Light Work Annual. The judges for this year were Christopher Gianunzio (Assistant Director, Philadelphia Photo Arts Center), Akemi Hiatt (independent curator), and Chuck Mobley (Director, SF Camerawork). Laura Heyman submitted a group of photographs from her on-going series, Pa Bouje Ankò: Don’t Move Again. Since 2009 the artist has been traveling to Haiti to set up a free, outdoor portrait studio in Port-au-Prince. Heyman is interested in questioning whether it is possible for a first world artist to produce work in the third world without voyeurism or objectification. Her project has continued to evolve over the years and now includes various expanding populations tied to future development and reconstruction. Jared Landberg is captivated by remnants, abandoned structures, overgrown paths, found ephemera, and expansive views. His site-specific photographic projects capture what is left behind in the wake of progress. Past photographic essays have included a nuclear power plant, mental health asylum, and a government munitions base. Landberg is currently photographing the community of Cortland, New York and the Hydrofracking controversy. The artist plans to create a book of photographs, archival and found photos, maps and an assortment of texts.

Jared Landberg is a photographer and bookbinder based in Syracuse, New York. He was a graduate fellow at Syracuse University and received his MFA in photography in 2010 and his BFA in photography from Indiana University in 2005. He has recently exhibited in the Syracuse area at the Everson Museum’s Fit to be Bound exhibition as well as various local galleries. He has worked as a consultant on book projects with past Light Work residents Christian Patterson and Valerio Spada in addition to assisting and consulting photographer Lucinda Devlin. Jared’s influences range from photographers such as Robert Adams, Jem Southam, Lewis Baltz, and Frank Gohlke to the writings of J.B. Jackson, Paul Virilio, and Leo Marx. He currently photographs the landscape of central New York State, with a large format camera, natural light, and flash, using both B&W and color film. His imaging intent is that of historic preservation through documentation of place with a focus on the colloquial subtlety, and personal as well as collective narratives regarding societal theories, place, and it’s usage. Janice Levy submitted a series of photographs taken in Riyadh, Kingdom of Saudi Arabia. While living in Riyadh for ten months the artist taught photography at the largest all women university in the world, Princess Nora bint Abdulrahman University. Saudi Arabia invests in the illusion of wealth and prosperity but Levy’s photographs show something entirely different. “In addition to revealing the neglect of the underclass, the photographs reflect my own reaction to living in a nation where isolation causes xenophobia, adherence to Sharia law justifies oppression of women, and an absolute monarchy hides its dictatorial power behind a veneer of paternalism.”

Janice Levy is a professor of photography in the Department of Media, Arts, Sciences and Studies, in the Roy H. Park School of Communications at Ithaca College, Ithaca, New York. In 1990 she was awarded the prestigious three-year National Kellogg Fellowship Award for Leadership. The Honickman First Book Award recognized her work twice. In 2004, she was among eleven finalists for her work Out of Place, photographs from Madagascar. In 2012 she was highly ranked among 49 semi-finalists for her Saudi Arabia photographs. International Photographic Awards (IPA) awarded her an honorable mention in 2013. Publications include What I See Who I Am: disabled students explore their world through photography with the help of photography students at Princess Nora University. Recent exhibitions include Les Yeaux du Monde, Charlottesville, VA; Gallery Notre Dame, Dijon, France; Les Amis du 7, Dijon, France. She was interviewed by NPR’s Robin Young for Here and Now about her experiences teaching and living in Saudi Arabia and was the keynote speaker for the 18th Julia Reinstein Symposium, Elmira College, Elmira, New York.

VIDEO: Jason Lazarus on Too Hard to Keep (Syracuse)