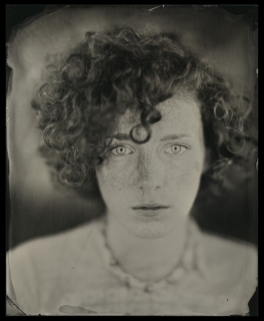 Our current Artist-in-Residence, Keliy Anderson-Staley, will be at Light Work through the end of August. She is actively seeking subjects in the area to pose for her ongoing series of tintype portraits. Click here for more info on Anderson-Staley’s work and details on how to contact her for a tintype sitting in Syracuse.

Anderson-Staley arrived with her husband, writer Matt Williams, to help her move and organize the van full of supplies and chemistry necessary for her work. Williams sent us the following email about Anderson-Staley’s project, and his words provide an intimate view on the continuing project: “. . . I’ve watched Keliy photograph for many years, but watching her in action at Light Work, I was really struck by just how performative her process is. So much of the meaning of her tintype project is contained in the shoot itself: Preparing the sitter, posing the image, bringing the model into the darkroom to see his or her face appear as a positive on the tin. She is a chemist, a magician, a traveling salesman, and I can almost imagine her at home in the nineteenth century, seeking out new subjects to experience the wonder of her strange technology. Invariably her models talk about the magic of the process, the strangeness of their own appearance, the uncanny historicity of their own face. They see themselves as ghosts, as their own great-grandparents, as a double from the pages of a history book. I sometimes even think that Keliy wants to show them who they really are, and wants to liberate their image from the routine visual experience they have of themselves.

Portrait photographers often talk about finding the image that best represents a person, or about capturing the “essence” of an individual, but this is a myth. The human face changes too quickly, is too infinitely expressive to be reduced to one static image. In one portrait shoot, Keliy might capture vastly different expressions or moods. Although she tells her models not to smile, a smile may creep in nonetheless, or a cloud of emotion appears across the brow—these emotions reveal a living face pulled out of time, a moment (10 seconds, 30 seconds) retained forever in the liquid of the chemistry.

She is a teacher when she works, but a collector, too, and one who will never be content with the size of her collection. The human face is an inexhaustible subject. When I see Keliy’s portraits hung side by side, I search for patterns: variety, similarity, difference, echoes of features, unexpected resemblances. Each face, with its intense gaze, seems to belong to a person looking at a mirror. The model is actually looking into Keliy’s lens, and really, she and we are the ones doing the looking. No two faces are ever the same, a fact we know about ourselves but that the project makes so tangibly clear. I’m amazed sometimes by how little people can resemble themselves in a photo, and how little two photos of the same person can resemble each other.

As this tintype portrait project enters its fifth year, and the number of people Keliy has photographed climbs into the hundreds, I have heard her ask herself why she it still doing it; why isn’t it finished? The answer in part, I think, is that a project like this could never be complete. The more I look at the faces the more I feel compelled to keep looking, and I sense a similar drive keeps Keliy photographing. A collection of human faces, if it is to avoid sampling based on categories and types, has to include every face. But I think it is also because Keliy finds faces more beautiful than anything, and her quest is to capture that beauty, to keep finding it in new individuals.” —Matt Williams