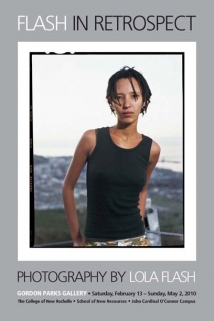 The exhibition Flash in Retrospect, featuring work by 2008 Light Work Artist-in-Residence Lola Flash, opened on February 13 at Gordon Parks Gallery on the John Cardinal O’Connor campus of The College of New Rochelle. The exhibition will run through May 2, 2010.

Flash’s work addresses boundaries and the physical and ideological areas that exist concerning those boundaries. Begun in 2002, [sur]passing examines how skin color impacts black identity both in real life and in front of the camera. With the portraits in epicene, Flash depicts a mosaic of subjects who have challenged societal confines, including those of race, class, and gender. Photographed in various cities in the United States and abroad, her series quartet looks at the interstitial places that comprise these cities and define the lives of their inhabitants.

Flash was born in the United States and is of African and Native American heritage. She spent ten years in London, where she regularly exhibited her work and also attained her MA. A classic Flash photograph, Stay Afloat, Use a Rubber, is part of London’s Victoria and Albert Museum collection. She is now based in New York. Read more about Flash and her work at her website. Flash has two photographs in the Light Work Collection, which you can view by clicking here. Her work was also featured in Contact Sheet 152, which you can preview and purchase here.

Images: Above, left, Amanda, Cape Town, South Africa, from the series [sur]passing. Right, the artist with her work at the exhibition opening on February 13, 2010.