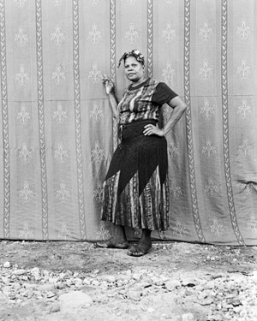 Several months ago Laura Heyman, a professor in the Transmedia Department at Syracuse University, asked us if we could help support a project she had planned for the Ghetto Biennale in Haiti. We have a small endowment fund to support mid-career artists and decided that this would be a worthwhile project to support, and we offered her our assistance.

For her project Heyman was interested in exploring formal portraiture that followed the example of artists like Mike Disfarmer, James Van Der Zee and Seydou Keita, who used the commercial and utilitarian aspects of their practice to portray their subjects with a consideration and respect that was both clear-eyed and beautiful.

Aware of the many cultural complexities of representation she had many questions, candidly stating, “I was highly conscious of everything that stood in the way of a real exchange between a subject from the first world and a subject from the third world—race, class, opportunity and lack of opportunity, agency, the ability to move freely through the world; all of the things that make communication difficult, as they are always present, but rarely discussed. […] What I found when I arrived in Haiti was that I was working within a community of fellow artists and their families and neighbors.”

Less than a month after Heyman returned from Haiti, the devastating earthquake struck causing unimaginable destruction and loss of life. Heyman is planning to return to Haiti within the next several months to offer her small part to the relief effort and to extend her project that has now become part record and part memorial.

This Fall Light Work will exhibit work from her project in our main gallery and publish the work in an issue of Contact Sheet. A selection of Heyman’s black-and-white portraits can now be viewed on Light Work’s website along with Heyman’s artist statement and a list of organizations that need donations for the ongoing relief and recovery efforts.