This review is written by Carl Mellor, a free-lance writer. He covered visual arts for the Syracuse New Times from 1994 to June 2019
—

Bundles of Wood, Nicola Lo Calzo’s solo exhibit at the Light Work gallery, swings from past to present from artifacts to photos of scenes in current-day Central New York, from discussion of the Underground Railroad to consideration of how historical events are sometimes ignored or little reported. The show combines narrative, inquiry, and reflection.

The artist sets the table by displaying objects and images documenting the Underground Railroad in Central New York: a photo of abolitionist Harriet Tubman as a young woman; the key to a Syracuse jail cell where Jerry Henry, a fugitive slave, was held before being freed by abolitionists; a copy of  As a Slave and as a Freeman; A Narrative of Real Life,  an autobiography written by Rev. Jermaine Wesley Freeman. It’s estimated that he helped as many as 1,500 fugitive slaves find their way to freedom.

In addition, there’s an image of an abolitionist convention held in Cazenovia during August, 1850. Frederick Douglass and Gerrit Smith, both prominent abolitionists, appear in the center of the photo.

Beyond that, the exhibition includes photos Lo Calzo shot during a 2017 residency at Light Work. Some are place-oriented, as seen in an image of a barn at the Harriet Tubman House in Auburn. Similarly, another photo depicts a Rite Aid store at the corner of Pine and East Genesee streets in Syracuse. That was the site of Loguen’s house, a station on the Underground Railroad. 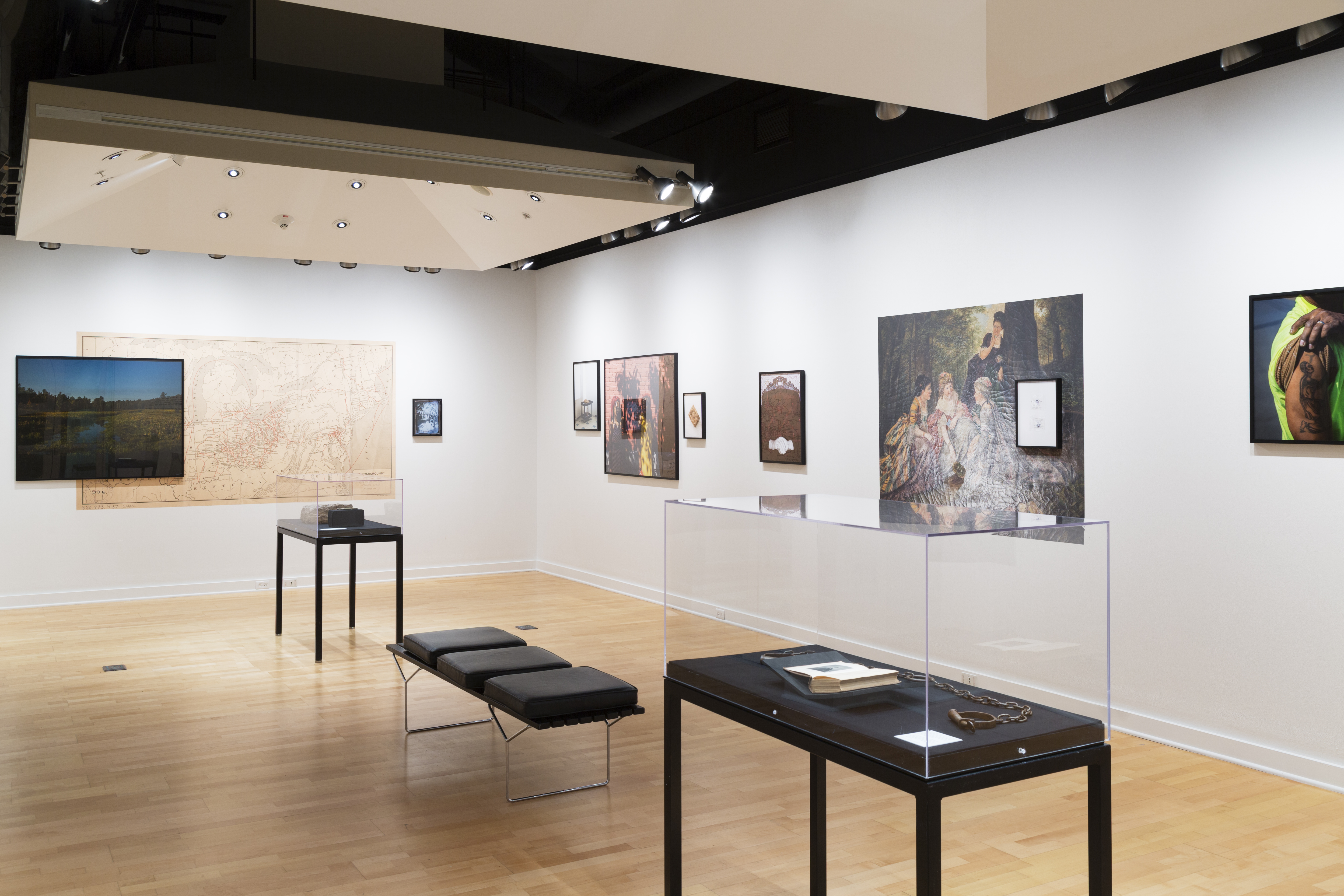 Two images reference landscapes such as a swamp near Auburn and the near-by Owasco River bed. Fugitive slaves often fled over water to escape bloodhounds; the photos explore that theme.

Yet another image documents downtown Syracuse at night, viewing a block whose darkness is interrupted by a street lamp and light peeping out from a second-floor window. In the background, in the shadows, we see the outline of a building. This is a block once occupied by the Erie Canal, an escape route for various slaves. The photo suggests that history isn’t tucked away somewhere in the past; it’s embedded in streets, fields, and soil.

And there are other instances in which the show communicates directly and indirectly. At a minimum, the image of the Rite Aid store poses a fundamental question: why wasn’t Loguen’s house preserved?

However, that leads to further questions regarding why Loguen isn’t better known. On one hand, it’s not as if he’s totally obscure. A park on East Genesee Street, on Syracuse’s East Side, was named after him. On the other, how many high school and college students in Syracuse even know his name?

It’s worth noting that he openly defied the Fugitive Slave Act of 1850. In a speech given in downtown Syracuse, Loguen, himself a fugitive slave, stated that the act “outlaws me and I outlaw it and the men who attempt to enforce it.” He backed up those words by taking part in the rescue of Jerry Henry from a local jail.

For Lo Calzo, the Light Work exhibit certainly isn’t part of a new body of work. During the past seven years, he’s worked on a long-term project focusing on memories of the slave trade, on the impact of slavery and colonialism on the African diaspora. He’s photographed rituals of Afro-Cuban communities, documented the descendents of maroons (escaped slaves) in Suriname, South America, traveled to Haiti, Niger, and other nations to expand the project.

Bundles of Wood begins with a title based on a secret code, on words signifying that fugitive slaves were soon expected. It encompasses not only the photos and objects already mentioned in this review but also other pieces. They include manacles used to bind a slave, pins with images of Tubman and Douglass, a marble sculpture depicting the clasped hands of Gerrit Smith and his wife, Ann. It was made by a former slave to thank the Smiths for their help.

Finally, the exhibition documents Lo Calzo’s continuing efforts to tell a complex story, to further explore how we remember slavery, how we weigh its impact not just on the United States during the 1850s but on present-day society. He has long asked “how do these memories, repressed by some and preserved by others, define our everyday relationships, our perception, and place of everyone in society?” 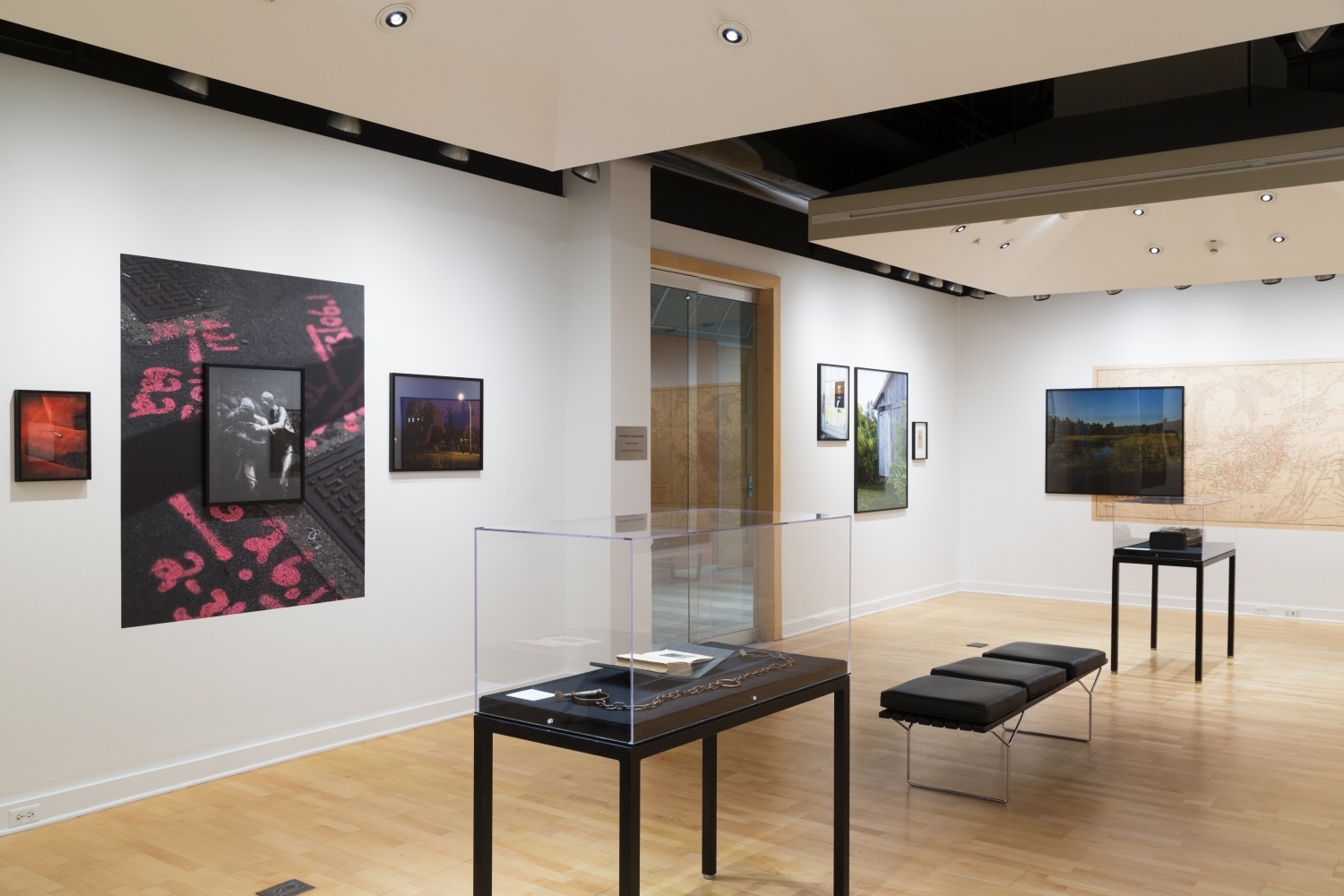 On Friday, October 11 at six p.m., Lo Calzo will come to Light Work, 316 Waverly Ave. on the Syracuse University campus, to deliver an artist’s talk and engage in conversation with playwright Kyle Bass. One day earlier, October 10, he will speak at the Onondaga Historical Association in downtown Syracuse. That lecture will focus on his research techniques, artistic practice and photography he did during his 2017 residency. Lo Calzo collaborated with the OHA, the Madison County Historical Society, and other groups in assembling the artifacts that appear in the exhibit.

All programs are free and open to the public. For parking information, visit parking.syr.edu

Thursday, October 10, 12-12:30 p.m. — In conjunction with the exhibition Bundles of Wood, the Onondaga Historical Association is proud to host a lunch time lecture with acclaimed photographer Nicola Lo Calzo. Lo Calzo will discuss his research, artistic practice and photographing the rich local history of the Underground Railroad (UGRR) during his residency at Light Work in 2017.

Friday, October 11, 6 p.m. — Discussion exploring the intersection of Photography, Race, Memory and the African Diaspora with award-winning playwright Kyle Bass and Bundles of Wood exhibiting artist Nicola Lo Calzo. This event is FREE and open to the public.

Nicola Lo Calzo: Bundles of Wood is funded in part by the Syracuse Symposium, an annual public events series, exploring the humanities through lectures, workshops, performances, exhibits, films, readings, and more. The year’s programming engages the meaning and impact of Silence from diverse perspectives and genres across a range of locations, locally and globally.