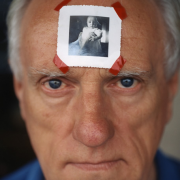 Romais curated this exhibition explore what makes a thought become a memory. She states, “The most emotionally laden experiences persist, and those left untouched, most likely become a memory trace…fragile and ephemeral.” The artists chosen for this exhibition create photographs that look at the idea of remembrance—letting go and making sense of past events, and using those memories to understand who they are today.

Growing up with a mother from Thailand and a Caucasian American father, Angie Buckley did not know her family history for many years. She relied on the conflicting memories and stories of relatives to piece together her heritage. Her images are created with a pinhole camera and cutouts of old family photographs, resulting in work that lies somewhere in between the real world and imagination. Buckley received her BFA in Photography from Ohio University, and her MFA in Photography from Arizona State University. She has received various awards, and her work has been exhibited nationwide, including at the Southern Light Gallery in Texas, McDuffy Arts Center in Virginia, and New York University, among many others.

Pedro Isztin’s color portraits metaphorically integrate formative childhood memories, using them to heal the adult that child has become. Part of a larger series that emulates a life journey, Destino III: Transformation revisits, in Isztin’s words, the pain, joy and suffering that our psyches are stamped with, no matter how little or large those experiences as a child.” Isztin was born to a Colombian mother and Hungarian father, and his work explores his diverse heritage. He lives in Ottawa, Canada, and has exhibited internationally. He has received numerous awards and grants, including a Photography Project Grant from the Canada Council for the Arts, and an Ontario Arts Council Award.

Unlike the other artists, Cyrus Karimipour revels in the flexibility of memories, and uses his images to visually recreate them to depict how he remembers an event or encounter. In his series Invented Memory, he creates scenarios by breaking down his negatives and rearranging the fragments to then be re-photographed. His imagery becomes ambiguous, as if looking in on someone else’s dream. Karimipour received his BA from Oakland University in Michigan, and his MFA from Cranbrook Academy of Art in Michigan. His work has been exhibited nationwide, including at the Philadelphia Museum of Art, the Museum of New Art in Michigan, and the Cleveland Institute of Art in Ohio, among others. His work has also been published in Harper’s Magazine, and The Detroit News, among others.

Paula Luttringer faces her own traumatic past, infusing her imagery with what other women remember about being abducted and held captive during Argentina’s Dirty War. Lamento de Los Muros (The Wailing of the Walls)consists of large black-and-white images, which depict the interior of the detention centers where thousands of people were held, tortured and “disappeared”. The images capture both history and memory. Luttringer was awarded a fellowship from the Guggenheim Foundation in 2001. Her work appears in the collections of the Museo Nacional de Bellas Artes, Buenos Aires; Museum of Fine Arts, Houston; and George Eastman House, Rochester, NY. She currently lives and works in Buenos Aires and Paris.

Miriam Romais is the executive director of En Foco, a non-profit organization dedicated to cultural diversity in photography. Her work has been exhibited in museums and galleries throughout the U.S. and abroad. Her work is part of the book, video, and HBO project titled Americanos: Latino Life in the United States (Little Brown & Co, 1999). She participated in Light Work’s Artist-in-Residence program in 1996.

Also on view at this time is the 2008 Light Work Grants exhibition, featuring the work of photographers Kathy Morris and Paul Pearce, as well as art writer Nancy Keefe Rhodes’ research project on Syracuse photographer Marjorie Wilkins. Each year Light Work awards three grants to photographers, critics, or photo-historians who reside in Central New York. The Light Work Grants in Photography program, founded in 1973, is one of the longest-running photography fellowships in the United States.

Light Work will host a reception to celebrate these exhibitions on Thursday, November 13 from 5–8pm. Gallery hours are Sunday to Friday, 10am–6pm, and by appointment. To schedule an appointment, please call 315-443-1300. The exhibitions and reception are free and open to the public. Paid parking is available in the Marion Parking Lot and Booth Garage. Light Work invites groups and individuals to schedule tours and gallery talks of the exhibition and facility. Light Work is a nonprofit, artist-run organization dedicated to the support of artists working in photography and electronic media. Light Work is a member of CMAC, the Coalition of Museum and Art Centers at Syracuse University. For more information about any of these exhibitions, please contact Jessica Heckman at Light Work, 315-443-1300 or jhheckma@syr.edu.

**Digital press images from all exhibitions are available upon request.