We’re packing up and heading west for the San Francisco Fine Art Fair, which will be held at the Fort Mason Festival Pavilion May 20-22, with a special opening night preview on May 19. Please stop by Booth 54 and say hello to Associate Director Mary Goodwin and Promotions Coordinator Jessica Reed. We’d love to tell you more about our mission, show you some work by our current artists-in-residence, and sell you a beautiful fine art print (like the image shown here by former Light Work Artist-in-Residence Yolanda del Amo). Every penny we make at the fair goes right back into our programming to support emerging artists. Hope to see you there! Click here for admission information and here for a list of programming and events. 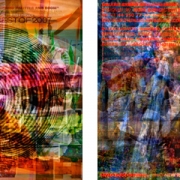 Washington D.C. based artist Dean Kessmann shares his experiences during his residency at Light Work in July 2009, which culminated in a generous gift to the Light Work Collection.

Nearly two years ago, I arrived at Light Work ready to start printing a nearly completed series titled A Year at a Glance. Once those prints were complete, I quickly went to work on a second project, Art as Paper as Potential: Giving/Receiving, which was in the middle stages of production. After I made sufficient progress on the second project, I turned my attention to a third project, which is still untitled, and, unfortunately, unfinished. My goal was to complete A Year at a Glance, make significant progress on Art as Paper as Potential, and get at least one test image done for the third project. I’m happy to say that I achieved my goal; it’s amazing how much work you can get done when you have the support of the awesome Light Work staff.

Prior to receiving the residency at Light Work, A Year at a Glance was precariously close to being placed on the eternal back burner of ideas that never see the light of day. The worst part was that this project was nearly finished; I simply had not had the time to focus my attention on it once it reached a critical stage in the process. Other projects and other exhibitions were, for various reasons, taking precedence over this one, so A Year at a Glance kept being postponed. When I received the call from Mary Goodwin at Light Work telling me that I had been selected as an Artist-in-Residence, she asked whether the project that I had included in my application, A Year at a Glance, had been completed. Feeling somewhat embarrassed because my application had been submitted over a year earlier, I sheepishly answered, no. To my surprise, this answer was warmly received; Mary was very enthusiastic about having me work on this series when I arrived. Artists-in-Residence are not required to work on any specific project while in Syracuse, which is one of the great things about Light Work. However, after thinking about my options, I decided that I should pull this project off the back burner and make it my first priority. Once the sixteen diptychs that make up A Year at a Glance were completed, I felt a weight lifted off my shoulders, a huge sense of satisfaction, and very thankful to Light Work for believing in this project. As mentioned above, I went on to make significant progress on a second project and headway on a third. In the end, I was able to accomplish more during the month in Syracuse than I generally get done in an entire year. This was the gift given to me by the staff at Light Work. Most Light Work Artists-in-Residence donate a print or two to the permanent collection at the end of their residency. I could have submitted a single diptych from this series; however, I wanted Light Work to have the entire series. The fact of the matter is that this work may not have been done had I not been awarded a residency. Furthermore, I may not have bothered to complete A Year at a Glance had Mary not told me how excited she was about this series when I talked to her for the first time. A Year at a Glance presents a snapshot of the art world through the front and back covers of sixteen art magazines. Even though a single diptych encompasses a year of arts coverage from the perspective of one magazine, it provides a somewhat narrower picture than the entire set. While the entire series of prints is not an exhaustive typology by any means, it does provide a slightly wider angle of view. Light Work made it possible for me to complete this project; therefore, it only seemed right that I donate an entire edition of this series to the collection, which I happily did. —Dean Kessmann

Dean Kessmann teaches photography at The George Washington University in Washington, D.C. His work has been exhibited at a wide variety of venues, from appearances at Aqua Art Miami and PULSE New York to several shows at Conner Contemporary Art in Washington, D.C. For more information about Kessmann and his work, visit his website at www.deankessmann.com. 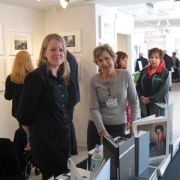 We had a great fair in Chicago over the weekend. Just a couple of scenes from the booth – we enjoyed seeing some long-time friends and making so many new ones.