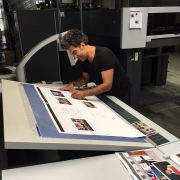 Light Work is pleased to announce a new partnership with publisher MACK to honor an artist with the Light Work Photobook Award. The inaugural recipient is a photographer Mahtab Hussain, for his monograph You Get Me?. Hussain previously participated in Light Work’s Artist-in-Residence Program in March 2015 as part of a yearly partnership Autograph ABP in London. The publishing of You Get Me? has also been made possible with support from Arts Council England.

The Light Work Photobook Award is given each year to an artistic project that deserves international attention. As with all of Light Work’s programs, in selecting the artists to receive this recognition an emphasis is made to highlight emerging and underrepresented artists of diverse backgrounds.

Press for this groundbreaking project includes features in The New York Times, British Journal of Photography, BBC News, Buzz Feed, and The Guardian, among others. Photographed over a nine-year period, You Get Me? by British artist, Mahtab Hussain is a book centered on the experiences of young working-class South Asian Muslim men in contemporary Britain. Largely a book of portraits, it also documents the local environments of these men, picking up on manifest signs of multicultural identity. The photographs in You Get Me? are interspersed with evocative extracts from Hussain’s numerous conversations with Muslim men, principally in London, Nottingham, and Birmingham. Bringing issues of identity, masculinity, displacement and belonging to the fore, the book addresses concrete experiences of these men against a backdrop of derogatory media representations. Confronting the politics surrounding immigration and identity in Britain, Hussain at once celebrates the implicit agency of his photographic subjects, while recognizing their struggle to determine a sense of self.

Pre-Order a first edition SIGNED copy of our 2018 Book Collectors Offer You Get Me? by Mahtab Hussain and you will also receive a complimentary subscription to Contact Sheet (a $115 value) for only $75!