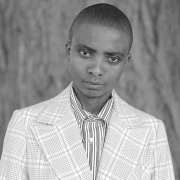 Zanele Muholi’s work has always focused on telling stories that were rarely incorporated into the national narrative, or South Africa’s celebration of itself as a newly democratic nation. As a “visual activist,” Muholi’s portraits provide the foundation for her remarkable, long-term cartographic project, Faces and Phases. This portrait series, created between 2007 and 2014, maps, “commemorates and celebrates the lives of the black queers” Muholi met during journeys that spanned rural and urban South Africa. The project also collects first-hand accounts that bear witness to the schizophrenic experience of living in a nation where LGBTI people are often the targets of violence—this despite the fact that South Africa’s progressive constitution specifically protects the rights of Lesbian, Gay, Bisexual, Transgender, and Intersex (LGBTI) people. Having realised that not having photographic evidence of her maternal or paternal grandparents resulted from a “deliberate” erasure, Muholi remembers feelings of “longing, of incompleteness, believing that if I could know their faces, a part of me would not feel so empty.” That knowledge of deliberate, systematic erasure from the nation’s historical records is so acute that she is driven now to “project publicly, without shame.”

We recognize, today, that ethnographic and tourist photographs serve the function of aiding Western visitors’ creation of subjectivity—as superior, perhaps benign, socially, intellectually, and geographically mobile, and participating in the flows of modernity. That project of European modernity required that the African subject remained firmly “fixed,” immobilized in time and place. Given that history, Muholi’s image of Lerato Dumse, a writer who documents their travels together for this project, reminds us of the significance of black portraiture photography—photographs of black subjects by black photographers—in the twentieth and twenty-first centuries. As with W.E.B. du Bois’American Negro installation for the 1900 Paris Exposition—which organized 363 images into albums—Muholi uses photography and portrait-making as powerful political tools that contribute to one’s self-perception, as well as to the ways that others visualize who you are, as an individual or as a social group. Muholi’s work also signifies an older tradition of African studio photography, in which it is plain that those within the frame—people who colonial administrators and contemporary travelers from the geo-political West often misrepresented and caricatured—are no longer satisfied with remaining as simple “subjects.”

Today, there is a proliferation of photographs of black people, and in particular of black, African people, by white photographers. It is not just an “absence” of images that Muholi’s work helps counter, but an over-abundance of a problematic gaze that has its roots in white supremacist ideologies. As photography scholar John Edwin Mason recently wrote on Twitter, “White people like to look at photos of black people. There’s a seemingly insatiable demand [for] photos of black folks. Part of the reason is that photos give us permission to stare.” Though we “all like to stare,” he argues, audiences in the geo-political West have historically liked “to stare at the racial other.” Whilst some of that looking can be borne of somewhat benign curiosity, and even accept and celebrate the challenges that Muholi, and other black women and non-cis-gendered photographers pose, much of what we continue to reward in portrayals of African people is what Mason calls a “safe” gaze. That photographic gaze allows the “looker” who is geo-politically situated in the West to remain in a comfortable, traditional role—wherein they are entitled not only to look, but to penetrate, and to impose. It does not “disrupt established ways of seeing—and, thus, knowing—black and brown people,” or “take viewers outside of their comfort zones.” Because of the “safety” that such portraiture affords white viewers, especially, Mason concludes, it does little to challenge or change ways “of seeing and knowing that are the product of societies in which white supremacy is a given.” Though such photographs are often attractive (mostly because they meet stereotypical expectations we have been trained to imagine as “African”), and technically and compositionally expertly-made, they also fail us by presenting our world in solely heteronormative terms.

That failure of imagination is what this remarkable photograph by Muholi—and Lerato Dumse’s seemingly simple, direct look-back at us—counters. Here, Dumse is a powerful, playful co-creator of their portrait. They are self-styled, moving between phases in mood, in dialogue with the photographer and potential audiences.

The photograph gives us permission—perhaps even invites us—to stare back at Dumse’s lovely, symmetrical face, and their choice of slightly oversized check-pattern jacket, paired with an unlikely shirt patterned with bold, vertical stripes. But we know that we are not driving their narrative, or simply instrumentalising the person in the frame of the photograph as an “other” to further our own subjectivities. Rather, we commune with them with a respect and an understanding that this person is able to powerfully fashion themselves and how they wish others to see them. They are in dialogue with us, looking back and pushing back against the narrow possibilities that hegemonic culture made us all believe is all we have. This portrait gives us—all of us— the courage to ask for far more. 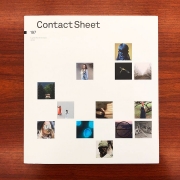 National Endowment for the Arts (NEA) acting chairman, Anne Carter announced on Wednesday, February 13 that Light Work is one of 1,000 not-for-profit national, regional, state, and local organizations nationwide to receive an NEA Art Works grant. In its first 50 years, the National Endowment for the Arts awarded more than $5 billion in grants to recipients in every state and U.S. jurisdiction.

Today, the NEA announced awards totaling more than $27 million in its first major funding announcement of the fiscal year 2019, including an Art Works award of $35,000 to Light Work to support Light Work’s Artist-in-Residence Program and production of Contact Sheet: The Light Work Annual. The Art Works category focuses on the creation of art that meets the highest standards of excellence, public engagement with diverse and excellent art, lifelong learning in the arts, and the strengthening of communities through the arts.

“The arts enhance our communities and our lives, and we look forward to seeing these projects take place throughout the country, giving Americans opportunities to learn, to create, to heal, and to celebrate,” said Mary Anne Carter, acting chairman of the National Endowment for the Arts.

“We’re grateful for the National Endowment for the Art’s continued support of our residency program and their recognition of Light Work as one of the leading arts organizations in the country,” says Light Work’s director Shane Lavalette. “Thanks to the support of the NEA we are able to offer today’s emerging and under-recognized artists the time, space and resources they need to develop their creative projects.”

Every year Light Work invites between twelve and fifteen artists to come to Syracuse to devote one month to creative projects. Over 400 artists have participated in Light Work’s Artist-in-Residence Program, and many of them have gone on to achieve international acclaim. The residency includes a $5,000 stipend, a furnished artist apartment, 24-hour access to our state-of-the-art facilities, and generous staff support. Work by each Artist-in-Residence is published in a special edition of Contact Sheet: The Light Work Annual along with an essay commissioned by Light Work.

For more information on projects included in the NEA grant announcement, visit arts.gov/news. 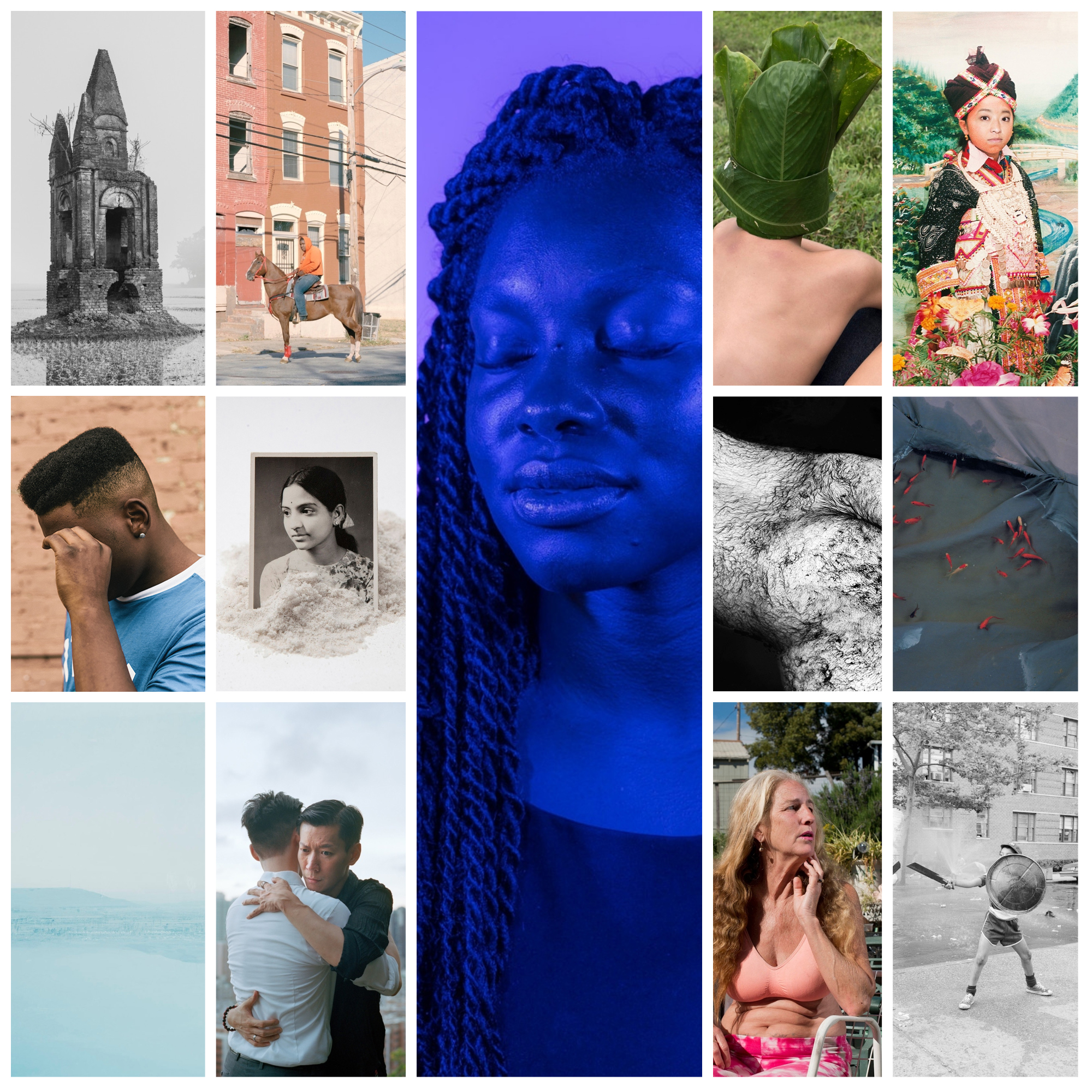 To learn more about the 2019 Artists-in-Residence, read our announcement on the Light Work Blog.

To become a supporter of Light Work yourself, consider making a contribution by beginning or renewing your subscription. We encourage you to help us achieve our goal of matching the NEA’s generous support. Contribute today and get something back in return. Browse limited-edition prints, signed books, and Contact Sheet at  www.lightwork.org/shop

All subscriptions will assure that you receive the NEA-supported issue of Contact Sheet: The Light Work Annual 2019 next summer. 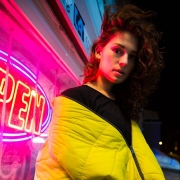 At Light Work, we appreciate the amazing energy and hard work of our interns and work-study students. From projects in the lab to the installations of our exhibitions, they truly help to make all that we do possible. We thought it would be nice to introduce some of our recent interns in a series of posts here on our blog.

Today, we’re happy to introduce you to Maddy Fetzko!

What are your aspirations as an artist?

To be able to do it all, to experiment with different mediums, tools, and styles. I don’t want to compromise my abilities in art and photography for design, or vice versa. I really want to incorporate more illustration into my work, because that’s something I used to do a lot of when I was younger but have been slacking in recently.

What photograph do you wish you had taken, but missed the opportunity?

When I was on a trip to the Caribbean, I saw a man who had a parrot perched on his shoulder. I asked the name of the parrot he said her name was “Beautiful”. I would have loved a portrait of him and the very well-behaved Beautiful.

What is your favorite smell?

Coconut everything and Pine scented candles

How motivated staff and members are to continue creating things they are passionate about, despite other responsibilities like work and school. Also the fact that people from around the world travel all the way here to learn something new about photography. I’ve already learned a ton about printing, film photography, and editing in the few months I’ve worked here. 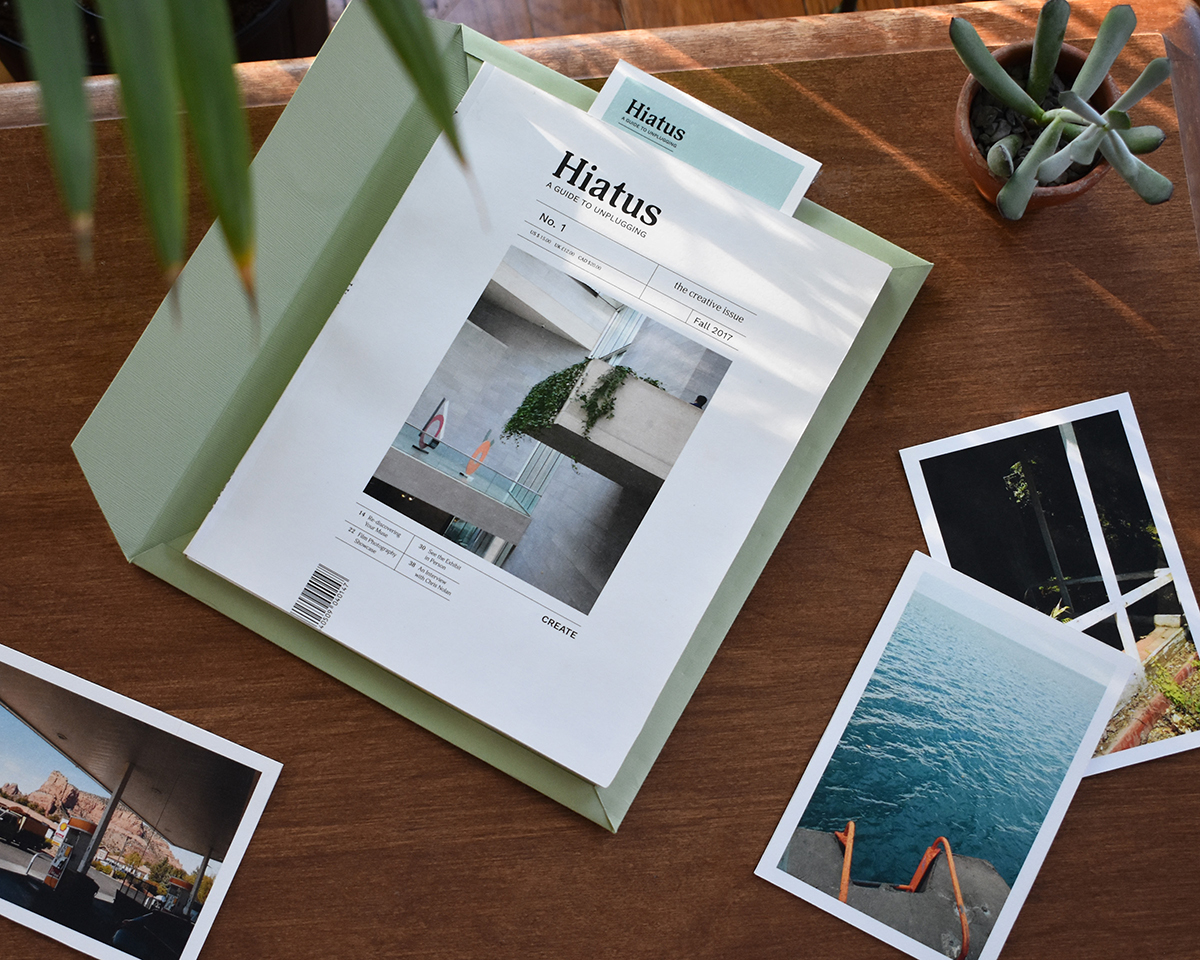 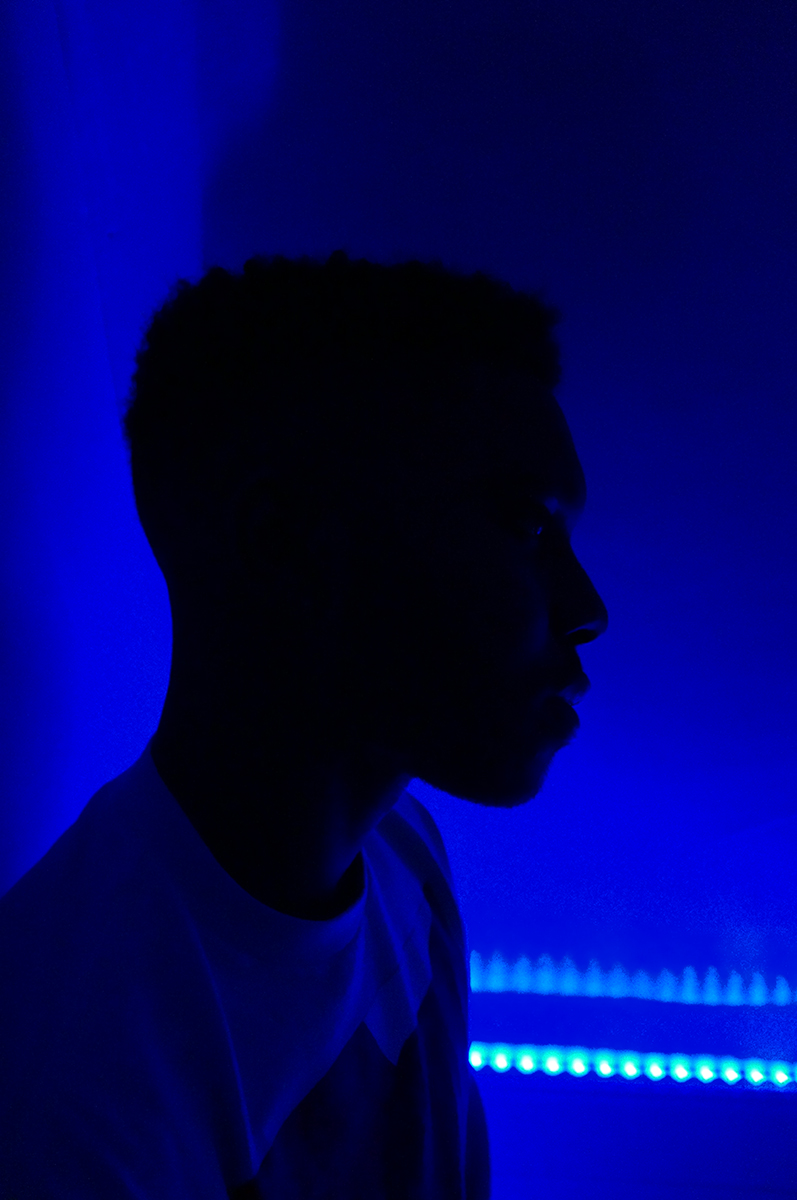 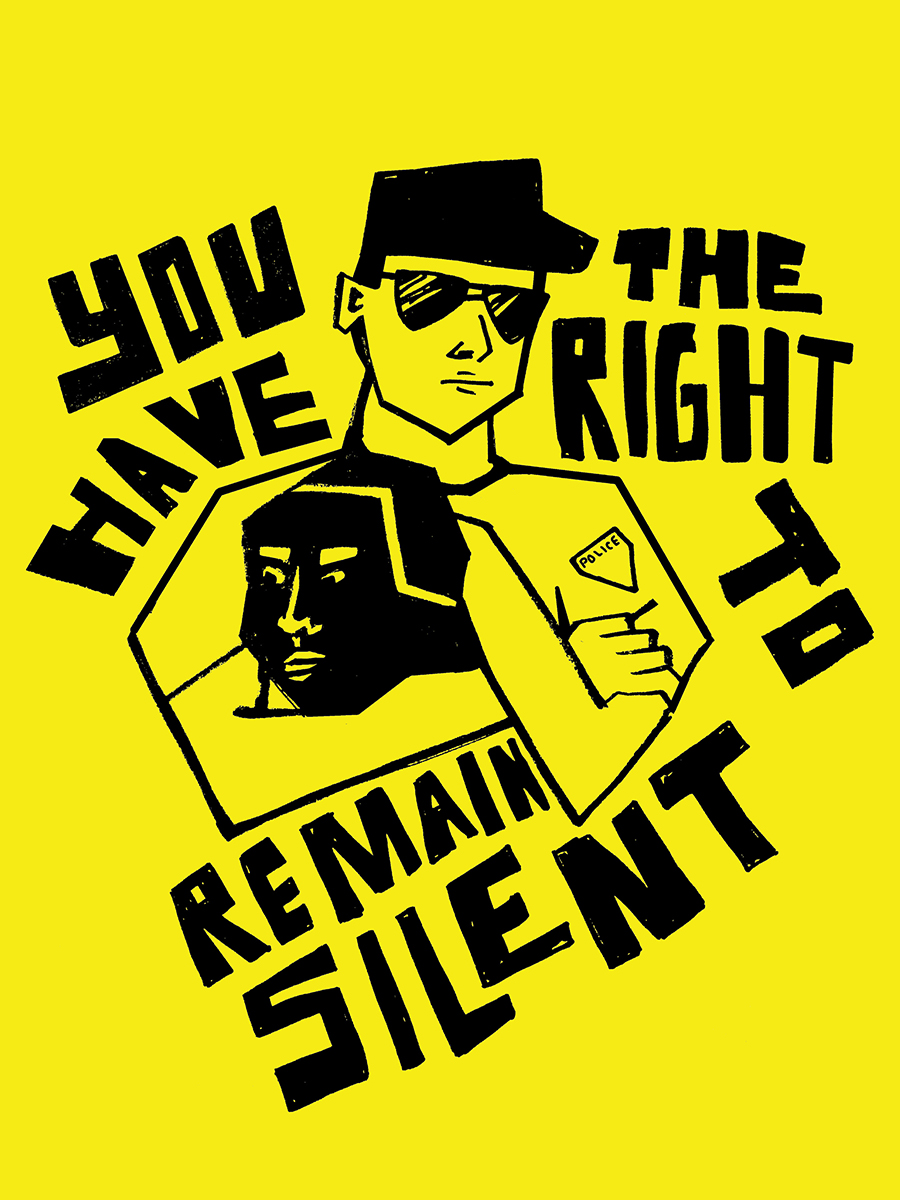