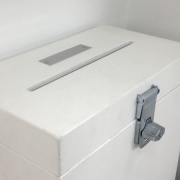 In 2010 Chicago-based artist Jason Lazarus initiated a growing archive of photos deemed “too hard to keep.” T.H.T.K. (Too Hard to Keep) is a place for photographs, photo-objects, and even digital files to exist when they are too difficult to hold on to, yet too meaningful to destroy. Participants have dictated whether the photographs submitted to the archive may be shown freely with other pieces of the archive, or if they are only to be displayed face down, adding to the charged significance of each object. Out of this expanding collection site-specific installations occur. With T.H.T.K. (Syracuse) Lazarus shares a slice of the larger archive alongside anonymous local submissions in a carefully considered installation at Light Work.

Drop off your photo(s) anonymously in the drop box located at Light Work prior to and during the length of the exhibition. Photographic objects and albums are also accepted, and can be left at the front desk.

If you are not local and would like to submit to the archive, please mail your prints or objects in an envelope addressed to Light Work, ATTN: Too Hard to Keep, 316 Waverly Ave., Syracuse, NY, 13244.

To be considered for exhibition or publication, submissions should be dropped or arrive at Light Work by Friday, February 22. Mark Steinmetz is known for his black-and-white photographs that explore the magic of the everyday. With delicate tones, his images and various books have found their place in the canon of photography. Among his many monographs is a soft spoken book titled Italia: Cronaca di un Amore (Nazraeli, 2010), which includes this memorable portrait of a Dalmatian on the streets of Perugia, Italy. His photographs are held in the collections of The Museum of Modern Art, The Metropolitan Museum of Art, and The Whitney Museum of American Art, New York, NY; The Art Institute of Chicago, Chicago, IL; and The Los Angeles County Museum of Art, Los Angeles, CA, among others. Steinmetz participated in Light Work’s Artist-in-Residence Program in 1998. 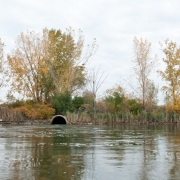 Onondaga Lake, which borders the city of Syracuse, is a Superfund cleanup site and a holy lake for the nearby Onondaga Indian Nation. I have explored this paradox, photographing the lake and its tributaries from a canoe and on shore.

I find the lake gorgeous at times and repulsive at others. Raw sewage flows into the lake during heavy rains, as the municipal wastewater treatment plant is overwhelmed. Algae grows in the phosphorus-rich waters, giving off a stink in the summer. Mercury and other heavy metals lie on the bottom of the lake — remnants of chemical industry in years past. Swimming has been banned since 1940.

Honeywell International, which bears responsibility for the industrial pollution, is dredging, building barriers, a pipeline and wetlands, expecting to spend over $500 million. Onondaga County has improved wastewater collection and treatment and reduced storm water runoff. The Onondaga Nation is not satisfied with these plans, and has asked for a more thorough job at a cost of over $2 billion.

As the lake improves, bald eagles have taken up residence, and great blue herons are numerous. Onondaga Lake is an extreme example of much of our natural world: polluted yet still achingly beautiful.

Willson Cummer is a fine-art photographer, curator and teacher who lives in Fayetteville, NY. Images from his projects have been included in national juried exhibitions. His first solo New York City show opened in December 2011 at OK Harris, in Soho. He curates and publishes the blog New Landscape Photography. Willson teaches at Light Work/Community Darkrooms in Syracuse, and at area colleges. See more of his work online at www.willsoncummer.com 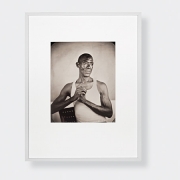 Edition of 50, signed and numbered by the artist

For her series [Hyphen] Americans, Keliy Anderson-Staley has created a vast, broadly diverse collection of portraits with the wet-plate collodion process using nineteenth-century chemical recipes, period brass lenses, and large wooden view cameras. Each individual – identified only by a first name – defiantly asserts his or her self, resisting any imposed external categorizing system. At once contemporary and timeless, these portraits raise questions about our place as individuals in history and the role that photographic technologies have played over time in defining identity. This portrait of Kevin, captured in Syracuse, is reproduced here from a wet-plate collodion tintype as a beautiful and collectible print. Her work has been exhibited at The National Portrait Gallery at the Smithsonian, Washington, DC; The Portland Museum of Art, Portland, ME; The Southeast Museum of Photography, Daytona, FL; Catherine Edelman Gallery, Chicago, IL; and The Palitz Gallery, Lubin House, New York, NY, among other venues. Anderson-Staley participated in Light Work’s Artist-in-Residence Program in 2010. 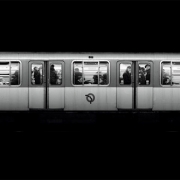 Light Work is pleased to announce the exhibition Kontinuum, featuring the work of Adam Magyar.  The Hungarian artist has been receiving significant international attention with his art that explores concept of urban life. Magyar depicts the synergies of people, the cities they inhabit, and the technological support structures created to facilitate life in large cities. He explores the flow of time and life through multiple photography and video-based series, three of which will be presented in Syracuse.

Magyar uses unconventional devices, such as an industrial machine-vision camera that relies on scanning technology. Utilizing software and drivers which he programs himself, Magyar creates constructed images that capture moments in time and place that can neither be seen with the bare eye nor conventional optical cameras. The resulting photographs break with traditional Renaissance-defined perspective. The images combine the aesthetics of classic photography with a technology that redefines our understanding of linear time and singular space in a perfect blend of science and art.

While Magyar uses technology rarely applied in fine art, his emphasis is on basic questions of how we understand ourselves within society and as that society. Seeking to find an objective way to see the world around him, he has turned to a technology that captures time as well as the flow of society, while eliminating most other elements that make up urban life. In the end, Magyar scrutinizes the transience of life and man’s inherent urge to leave some trace behind.

The exhibition features custom-framed digital silver gelatin prints and pigmented inkjet and will be accompanied by a 48-page monograph on the artist. The Light Work-curated show will then travel throughout the country.

From January 10 through February 2, Magyar’s video Stainless will be featured at the Urban Video Project’s Everson Museum of Art site. The video will run Thursday–Saturday, dusk–11p. The Urban Video Project (UVP) invites the public for “Hot Chocolate with the Artist.” The special event is scheduled for February 1, 6-7p at the Everson Museum of Art, 401 Harrison Street, Syracuse, NY. Urban Video Project is a multimedia public art initiative of Light Work and Syracuse University that operates several electronic exhibition sites along the Connective Corridor in Syracuse, NY.

Magyar’s work has been exhibited in various solo and group shows internationally including Helsinki Photography Biennial in Finland; MFAH Mixed Media event and the Graduate School of Design Harvard University in the USA; Berlin Selected Artists exhibitions in Germany; the Ethnographic Museum Budapest and Faur Zsofi Gallery in Hungary; Rhubarb Rhubarb in the UK; and Karin Weber Gallery in Hong Kong. His work is part of numerous collections, such as Deutsche Bank, the Hong Kong Heritage Museum, and the Bidwell Projects. His photographs have been published in the book In the Life of Cities by the Graduate School of Design Harvard University, Light and Lens by Robert Hirsch, and in photography magazines including PDN and PQ Magazine in the USA, Flash Art in Hungary, Digital Camera Magazine in UK, and Katalog in Denmark. He lives in Berlin. His work can be viewed at www.magyaradam.com. 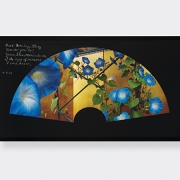 Edition of 100, signed and numbered by the artist

“Photography deals exquisitely with appearances, but nothing is what it appears to be.”

Duane Michals‘ series Photographs of the Floating World features brightly colored prints with hand-applied text, where the images assume the shape of traditional Japanese fans. Unconventional in format, the series references Ukiyo-e, a popular genre of Japanese woodblock printing noted for the absence of perspective and flat areas of pronounced color. The English translation of Ukiyo-e is “floating world,” and images of this genre aspire to remove the viewer from the mundane and lift the spirit to the realm of the transcendent. Michals presents a modern and personal approach to this artistic tradition, exploring the enigmatic nature of contemporary life by blurring the boundaries between fantasy and reality with Eastern and Western influences. Since the 1960s Michals been recognized as an innovative and influential artist. His work is included in the collections of the J. Paul Getty Museum, Los Angeles, CA; the Metropolitan Museum of Art, New York, NY; the Moderna Musetet, Stockholm, Sweden; the National Museum of Art, Kyoto, Japan; and the Carnegie Museum of Art, Pittsburgh, PA, among other public and private collections. His bibliography includes over ten monographs, including Photographs from the Floating World (Steidl, 2012), featuring his colorful Japanese-inspired images. 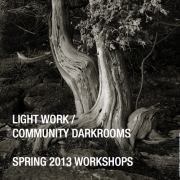 There’s still time to get into some of the great workshops at Light Work/Community Darkrooms this Spring! Sign up today to reserve your spot:

Making the Most of Your Scanner

Visit www.communitydarkrooms.com to for info and to register today! 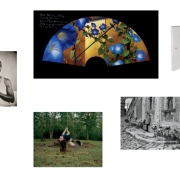 The Benefactors Offer represents an excellent way to further your collection while supporting Light Work’s mission. Contributors of $1,500 will receive Duane Michals’ image from the Master Print Edition, all three prints in our Fine Print Program (Keliy Anderson-Staley, Shane Lavalette, and Mark Steinmetz), and a signed copy of The Code by John Gossage. (A $2,015 VALUE!) By participating in this category you will save on the cost of the prints and book, and receive a one-year subscription to Contact Sheet.

NEW! Get individual prints archivally framed in black or white for just $150 extra. Just select your framing preferences at checkout.

To browse all of our past signed prints and books, click here.