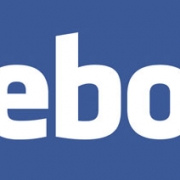 Light Work has been busy on Facebook! We now have three different Facebook pages to choose from so that you can get just the kind of information you want from us. Or, sign up for them all to keep up with everything that’s going on at Light Work and Community Darkrooms on Facebook:

* LIGHT WORK page: This one tells you about all of our programs and different ways we support artists.

* CONTACT SHEET page: Tells you all about our publications and special offers.

Light Work was founded in 1973 as a non-profit, artist-run organization. We provide direct support to artists working in the media of photography and digital imaging through residencies, publications, exhibitions, a community-access digital lab facility, and other related projects.

New York-based artist Patterson has been working on his artist book, Redheaded Peckerwood, for the last two months at Light Work, starting in May when he was an artist-in-residence. Redheaded Peckerwood is based on the true crime story of 19-year-old Charles Starkweather and 14-year-old Caril Ann Fugate, who murdered ten people, including Fugate’s family, during a week-long killing spree across the state of Nebraska in 1958. The series was made during several road trips following the path of Starkweather and Fugate, from their hometown of Lincoln, Nebraska to the point of their capture in Douglas, Wyoming. The resulting images include significant places and things from their story. The project is part road trip, part time machine, and mostly a testament to the thin line between fame and infamy, truth and representation.

It’s been fun and exciting for us to watch as Patterson has utilized almost every aspect of our facility to make this book come together. After perfecting the images in our digital lab and finalizing the layout in InDesign, Patterson used one of the 4880s in our public access digital lab to print the entire guts of the book. (For the paper geeks out there, the book is printed on Moab Legion Paper, Lasal Photo Matte 235. After talking to Patterson about the project, Moab generously donated enough paper for him to print an edition of 10 of the books.)

Watch here as our 4880 produces one sheet of the 144 pages in the book, which features 64 images. It took about 15 hours to print each book.

Throughout the project, Patterson has been working with Jared Landberg, a local book binder and photographer with considerable book binding skills. Together they have hand folded, sewn, and trimmed the book.

Watch here as Landberg sews one of the copies of Redheaded Peckerwood.

Yesterday, Patterson screen-printed the cover of the book with John Wischmann, another local artist. The book cover features an image, in negative, of Starkweather and Fugate on a gray book cloth, which references the photographic negative.

Redheaded Peckerwood also contains facsimiles of artifacts from the case, including a map, a poem, a list of dirty jokes, and a confession letter, all of which Patterson has painstakingly re-created down to the aged look of the paper, where appropriate. To make the facsimile of the confession letter for example, Patterson hand-traced each letter using a photograph of the original document and a light table.

The first few books will be “cased-in” this weekend. We’re hoping that Patterson will bring us a finished book on Monday! There is some time pressure to finish at least a few of the books soon, as Redheaded Peckerwood will be exhibited during this year’s Recontres d’Arles in France. 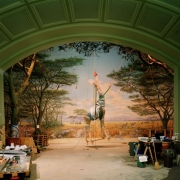 We’re pleased to announce that Richard Barnes will be joining us for a 2010 residency during the month of November. Barnes will finish out an incredible year of residents here.

Work by Barnes includes Animal Logic, Murmur, and Unabomber, a series of images that examines the cabin where Ted Kaczynski plotted his crimes. According to Barnes, his art, ” . . . looks at architecture as artifact and, placing it within the context of archaeology, challenges our conceptions of the way we inhabit and represent the built environment.” Barnes’s  images are in the collection of the Metropolitan Museum of Art, the Philadelphia Museum of Art, and the Hirshhorn Museum and Sculpture Garden, among other institutions. 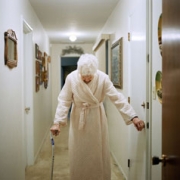 Andy Adams over at Flak Photo always has high quality features on the site, along with the daily gem that you get in the form of the Today’s Flak Photo. I especially enjoy the Review Santa Fe 2010 feature, going on through July 9, because I had the pleasure of meeting most of the featured artists at the event at the beginning of June. It’s great to see these 25 artists, including former Light Work  Artist-in-Residence Chad States, get this kind of exposure!

All the artists are worth a click, but make especially sure to click through to Amber Shields’s website and take an in-depth look at her Visions of Johanne series, a touching and poignant commentary on aging in America.

Former Light Work Artist-in-Residence Christine Osinski recently opened a solo exhibition called Staten Island Shoppers at Blue Sky in Portland. Like her series Drawn to Water (click here to see examples of this series in the Light Work Collection), the images in Staten Island Shoppers focus on people inhabiting a world apart. In the case of the shoppers, Osinski depicts a world apart that, despite its material opulence, feels more like a deserted island than a bountiful oasis.

Writing about the series, Osinski explains, “From 1993 through 1995 [when the artist was living in Staten Island] I roamed through an overwhelming landscape of excess, often under brutal lighting, to collect images that would match my experience of shopping—peering at the harsh faces of hunters and gatherers—adults and children alike.  As I did this work, the promise of capitalism, gratification through shopping, clearly became an activity of diminishing returns as I too became a hunter-gatherer, but of images.”

Christine Osinski’s exhibition Staten Island Shoppers will be showing at Blue Sky until June 27. Images from her series Drawn to Water are featured in the 2009 Light Work Annual.

We’ve been rolling fine with the name Light Work Blog, and it certainly doesn’t beat around the bush in terms of clarity! But we’re searching for something a little more creative, and we’re asking our readers to help us out.

The person who submits the winning idea wins a signed copy of the beautiful book Maggie by Emmet and Elijah Gowin for their trouble.

Post your suggestions in the comments or email me directly at magoodwi@syr.edu. —Mary Goodwin 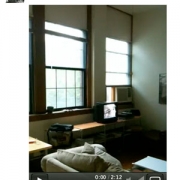 June Light Work Artist-in-Residence Gerard Gaskin is video blogging his residency throughout the month on Facebook. Here, Gerard shows you around the apartment where our artists stay during their residencies. (Click here for more information about the residency program and what is included.) He then talks about his plans for his time in Syracuse, which are both ambitious and doable, with Digital Lab Manager John Mannion’s help. 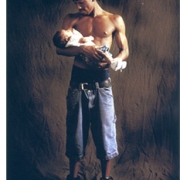 Last weekend, Light Work had the pleasure of hosting the MARK10 closing event for the New York Foundation for the Arts (NYFA). The three-day event brought together over one hundred artists, curators and arts administrators for coaching in professional practices, lectures, panel discussions and networking opportunities.

The NYFA group of artists, coaches, and presenters included a number of familiar faces, such as Ellen M. Blalock (AIR 2002), Lida Suchy (AIR 1994, LW Grant 2010), and Willson Cummer. But there were also a few surprises that reached further back into Light Work/Community Darkrooms history. Tatana Kellner was published in Light Work’s publications in the seventies, long before she participated in our residency program in 1992. Sylvia de Swaan completed residencies, received the LW Grant multiple times, and has served on our board. Carla Shapiro and Carlos Loret de Mola both were thrilled and surprised to see our state-of-the-art facility, that looked completely different from the modest darkrooms they worked in during their college years at Syracuse University many years ago. This made for a celebrated homecoming that was sweetened as they shared how formative their experience at Community Darkrooms was.

The MARK10 event was a sounding success and a pleasure to host due to the relentless efforts of NYFA MARK10 organizer and instructor Amber Hawk Swanson, and on a local side, the MARK10 liaison and CRC communication specialist Courtney Rile. 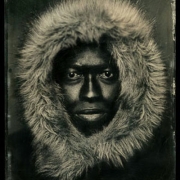 We’ve just added a comments feature to our blog, thanks to our dedicated and tireless web designer. So go ahead and tell us what you’ve wanted to say about any of our previous posts – the new feature is retroactive to all posts. We hope that adding comments will help this blog better serve artists by being a place where we can share ideas. To get the ball rolling, I’d like to talk a little about portfolio reviews. I just got back from Review Santa Fe, a fantastic event that brought together over 100 photographers with curators, publishers, and art administrators. There was some quality work there, including Jody Ake‘s amazingly rich ambrotype portraits (yes, he really does bring the actual plates to portfolio review events as well as prints made from them). Former Light Work Artist-in-Residence Chad States got a lot of attention for his Cruising series, which many people were talking about. It’s a real testament to the organizers, Center, that the event still felt really intimate even with so many people involved.

The Santa Fe reviews are 20 minutes long per person, which is pretty standard for such events. I’ve heard this format compared to speed dating, and that is really no joke. As a reviewer, within 20 minutes time you have to get a sense of who the photographers is and what they want to accomplish, gauge whether that is actually happening in the photographs, and then communicate that feedback in a way that is constructive and helpful. Meanwhile, the reviewer is trying to show enough of the work and tell enough of the story to provide context while also attempting to get specific questions answered. Whew.

To maximize the opportunities afforded in these types of reviews, a good dynamic has to develop pretty quickly. In the comments, post your stories of portfolio review victories, plus any tips you have on what works and what doesn’t work both as a reviewer and a reviewee. I’ll post my own tips farther down in the comments. —Mary Goodwin, Associate Director