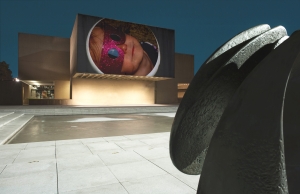 Join Light Work’s Urban Video Project for a special indoor screening on March 8, 2018 at 6:30pm related to the exhibition of AKIN: The Work of Keren Shavit & Eva Marie Rødbro.

The screening will feature additional works by the artists followed by a moderated Q&A with filmmakers Eva Marie Rødbro, Keren Shavit, and Shavit’s collaborator Adi Omry. Light refreshments from Recess Coffee & Roastery served after the program.

PLEASE NOTE: Some content in this screening may be inappropriate for younger or more sensitive viewers.

Urban Video Project (UVP) presents an evening with filmmakers Keren Shavit and Eva Marie Rødbro, whose work explodes the conventional relationship between documentarian and “subject,” exploring how fraught it can be with conflicting social emotions of recognition, rejection, misunderstanding, and alliance. The three pieces featured in this program operate as hybrid documentaries in which the filmmakers each insert themselves into the intimate interactions of an American family.

In Keren Shavit’s uncategorizable piece, FIG, the artist continues her exploration of filial dynamics by inserting herself into a family living in a struggling small town of North Carolina’s Appalachia as the be-wigged character named “Trixie.” Family members were asked to imagine the kinship which they had with Trixie and relate to her accordingly. She might be a daughter to one, a lover to another, a mother to another, and so on. Through intervention-style monologues spoken to Trixie, each of the family member’s projections of disappointment, desire, rivalry, and affection gradually mold a surprisingly vivid character around the central cipher.

Eva Marie Rødbro is currently working on a short piece for UVP that will continue the work she began with one family in rural Texas in her award-winning 2010 documentary I Touched Her Legs. I Touched Her Legs is an extraordinary portrait of a group of Southern teens hanging out in cars, rooms, and neighborhood yards in humid pool-party weather; it features a deft and skillful montage in which animals, insects children and adolescents all inhabit an environment easily and warmly shared.

For UVP, Rødbro has made Tropistic Creatures, a special edit from her new project, I Hope I See You before I Die, for which Rødbro revisits the tight family clan at the center of the award winning 2010 piece, I Touched Her Legs*, with whom she has maintained contact in the interim, reuniting with them in their new home in Colorado.

The title, Tropistic Creatures, is a reference to tropism, the biological phenomenon of movement or growth in response to environmental stimulus. The piece is a dreamy montage of children playing on asphalt lit by street lamps, a solar eclipse, animals both familiar and strange, plants that grow at night or in the dark — all interposed with the children’s poetic understanding (and misunderstanding) of the complexity of family relations. Blood is thicker than anything and the constellation of the family is the frame of the world.

Keren Shavit is a mixed media artist and curator, living and working in Brooklyn, New York. She graduated from Bezalel Academy of Art and Design, Jerusalem and was a selected participant in the documentary workshop at the Leon Schiller National Higher School of Film in Lodz and Sam Spiegel Film School, Jerusalem. Shavit has exhibited, published and screened her work in Israel, New York, Poland, Germany, China, Norway, and Iceland.

Eva Marie Rødbro is a photographer and award-winning maker of short films that explore youth culture in a variety of contexts. She was educated at art academies in Denmark and the Netherlands. Her most recent short We Chose the Milky Way (2015) screened at the 2016 International Film Festival of Rotterdam and at the 2016 Ann Arbor Film Festival, where it won the George Manupelli Founder’s Spirit Award.

The Watson Theater at Light Work is wheelchair accessible. CART services will be provided.

To make accommodation requests or ask questions about facilities, please contact info@urbanvideoproject.com or 315-443-1369.

This event is made possible through the generous support of the Syracuse University Humanities Center as part of the official program of Syracuse Symposium 2017-2018: Belonging.