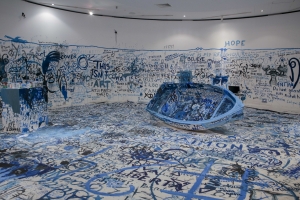 Inside the Everson:
YOKO ONO:REMEMBERING THE FUTURE

Curator Conversation in the Plaza

Light Work’s Urban Video Project is pleased to present YOKO ONO: REMEMBERING THE FUTURE, presented in partnership with the Everson Museum of Art, which will be featuring a contemporaneous survey exhibition of the groundbreaking conceptual artist Yoko Ono’s work inside the museum.

The four works on view at UVP will not be on view inside the museum and are selections of early performance-based film works which have been scanned and transferred to high definition video.

For YOKO ONO: REMEMBERING THE FUTURE, UVP will feature a selection of performance-based films which have been re-scanned and transferred to video, showcasing these film classics in high definition.

Each of the works center on the body – in all its vulnerability and ordinariness – intimately documenting the carrying out of seemingly simple performative premises. But as we watch, these simple gestures become by turns poetic, humorous, politically pointed, and profound.