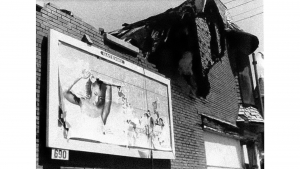 The works in this selection each explore the cosmological ramifications and resonances of the seemingly mundane. They will be on view at UVP’s outdoor architectural projection venue on the facade of the Everson Museum of Art September 6 – October 27, 2018.

This exhibition will be paired with an indoor screening of Harris’ still/here and other works on Thursday, October 18 at the Everson Museum. Harris will be present in-person for a Q&A following the screening.

Somewhere in a quiet outer suburb of the Milky Way galaxy, we live our lives in the pleasant warmth of our middle-of-the-road star, the Sun. Slowly but surely we will reach the point when there will be one last perfect sunny day. The sun will swell up, scorch the earth and finally consume it.

Approximates a small child’s fantasy world in the dark. In a series of close-ups, the nightlight is transformed into a meditative star-spangled sky. An improvisation, edited inside the camera and shot on a single reel. The stars swirl in silence.

A sunny afternoon on a tour boat in Chicago is haunted by the specter of other voyages.

This will be the first exhibition in UVP’s 2018-19 programming year titled The Past Keeps Happening, borrowed from a quote of Harris in conversation with film and media theorist, Terri Francis. During the year, we’ll be featuring artists whose work explores the ways in which the past’s imagining of the future and the future’s reflections on the past are always at odds with the lived present.