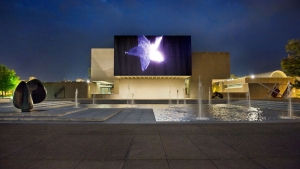 A moderated Q&A with Harris will follow. Light refreshments from Recess Coffee & Roastery served after the program.

Taking its name from the Jim-Crow-era prohibition against black men looking at white women, this hand-processed, optically-printed amalgam is a hypnotic inspection of sexual desire, racial identity, and film history.

I use non-narrative formal strategies to unravel long-standing narrative tropes of racial identity. Through this approach, questions of race and identity become questions of cinematic form, material and structure rather than a matter of narrative content. I take up the idea of threatening, outlawed gazes in order to suggest the ambivalent interplay of dread and desire associated with the bodies of black outlaws.

still/here is a meditation on the vast landscape of ruins and vacant lots that constitute the north side of St. Louis, an area populated almost exclusively by working class and working poor African Americans. On a basic level, the film constructs a documentary record of the blight and decay of that part of the city. For the most part, still/here is not an overt assessment of social injustices but the politics of class and race within American society are integral to the film. In still/here, the ruins are emblematic of an unimaginable absence at the core of much of the African Diaspora’s experience in North America. From the countless Africans lost in the Middle Passage to the lost future generation of unborn descendant of those that perished during the voyage, to the loss of family and loved ones that were sold away during slavery, absence has been and continues to be a fundamental feature of the African-American experience. But how, in an image-based medium such as film, does one represent absence? still/here acknowledges that an exhaustive rendering of absence is, at best, unlikely. With still/here, I attempt to engage this question by developing a vocabulary of absence. To that end, the film acknowledges the limits of representation and proceeds through a series of visual and aural breakdowns, erasures, contradictions and gaps. It does not use the documentary power of film to recuperate a sense of closure but instead dwells within the space of rupture occasioned by the presence of a profound absence.

Harris has exhibited widely at venues throughout North America and Europe including solo exhibitions and screenings at MICROSCOPE Gallery in Brooklyn, Autograph ABP in London, the Gene Siskel Film Center in Chicago and the Wexner Center for the Arts in Columbus, Ohio;  group exhibitions at the San Francisco Museum of Modern Art, the Art Institute of Chicago and the Artists’ Film Biennial at the Institute of Contemporary Arts in London and festivals including the Ann Arbor Film Festival, the International Film Festival Rotterdam, the VIENNALE-Vienna International Film Festival and the Edinburgh International Film Festival, among many others. Most recently, his work was featured in the 2018 Flaherty Film Seminar, The Necessary Image.  Harris is the recipient of a 2015 Creative Capital grant and a 2017 Alpert/MacDowell Fellowship.

The Everson’s Hosmer Auditorium is wheelchair accessible. CART services are available on request; please contact with requests no later than October 4.