Light Work’s Urban Video Project presents Doireann O’Malley: New Maps of Hyperspace_Test_01. We are excited to let you know that UVP’s exhibition of Commissioned 360 video work is moving online! This work will stream on UVP’s website April 9 through May 30, 2020.

Light Work commissioned O’Malley’s new work for exhibition at UVP. This piece is the third and final installment of the trilogy, Prototypes, which explores the potential for emerging technologies to radically transform our understanding of embodiment, gender, and life itself.

This is the first UVP exhibition to feature 360 video, which allows viewers to control the point of view of the video across 360 degrees by clicking, tapping, and dragging over the video.

In conjunction with the online exhibition, UVP is currently presenting an online screening of O’Malley’s feature film, Prototypes.

O’Malley will also present a video talk about their work, which will be available starting Saturday, May 16.

Set in a liminal time when humans have vacated the world, this new piece, New Maps of Hyperspace_Test_01, dwells on systems theory, climate care, digital consciousness, and data mining. In an entirely simulated space, colorful, swirling point clouds coalesce into a strangely beautiful post-apocalyptic landscape: a water basin and derelict bureaucratic building materialize. The computer-generated voice of the narrator guides us through the morphing, shape-shifting halls of the abandoned data and research center, where we encounter server racks, experimental incubators, and the solitary holographs of humans whose consciousness was uploaded before climate disaster killed off biological life. We learn the narrator was once human and is now stuck in the server. The work ends with a breakdown of the simulation: the simulated world is replaced by error messages. The work crashes and begins again.

This piece was commissioned by Light Work for UVP. The project also received support from the National Sculpture Factory Cork, Ireland and Berlin Program for Artists.

Doireann O’Malley is a visual artist originally from Ireland, based in Berlin since 2009. They use dreaming, writing, moving, filmmaking, 3D imaging and Virtual Reality through collaborative practices to explore the psychological and social implications of feminist technofuturism. 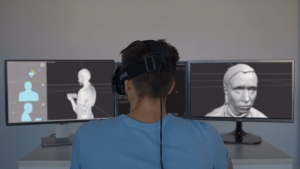 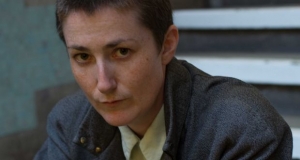