In the spirit of resilience, creativity, and community building in this time of social distancing, Urban Video Project is pleased to offer exclusive access to free online content.

Doireann O’Malley will give a talk about their practice with a focus on the Prototypes trilogy, which will be available to view using the link at the top of this page starting Saturday, May 16!

From Saturday, April 18 at midnight through the end of the exhibition, UVP will share virtual access to Doireann O’Malley’s Prototypes, a feature film that combines elements of O’Malley’s multichannel works, Prototype I: Quantum Leaps in Trans Semiotics through Psycho-Analytical Snail Serum and Prototype ll: The Institute on UVP’s platform.

O’Malley says of their work, “The destabilization of the gender binary is a threat to the construction of western dualistic philosophical binary systems and is at play to deconstruct much more than simply gender. I think it’s problematic to speak about what it means to be transgender as it is obviously a subjective and individual experience for people. I am interested in exploring this occurrence of unstable or shifting genders.”

These events are held in conjunction with the exhibition Doireann O’Malley: New Maps of Hyperspace_Test_01, which was commissioned by Light Work for UVP to be the first exhibition making use of UVP 360, which will allow members of the public to control the projection using their phones.

Please note that Urban Video Project has temporarily moved all programs online. We have suspended our outdoor architectural projection site at the Everson Museum and all in-person events until further notice as part of our commitment to helping flatten the COVID-19 curve. 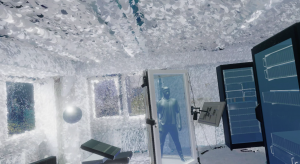