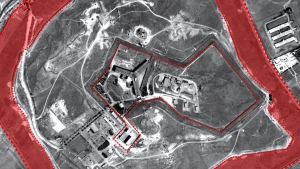 In response to concerns around COVID-19, Light Work’s Urban Video Project has closed to the public and canceled all scheduled receptions and artist talks from Friday, March 13 until further notice.

In conjunction with the exhibition, there will be a special indoor screening and talk titled Political Listening: The Forensic Turn in Art and Architecture featuring award-winning filmmaker and past Forensic Architecture research fellow Ana Naomi de Sousa on Friday, March 27, 2020 at 5:15pm in Slocum Hall Auditorium on the Syracuse University campus.

In our solid, everyday world we are surrounded by the invisible. Heat waves, sound waves, radio waves, tiny particles called muons — they seep through walls carrying information that can be used to surveil, to exonerate, or to incriminate. They can even be used as a weapon. Walled Unwalled comprises an interlinking series of narratives derived from legal cases that revolved around evidence that was heard or experienced through walls or doors, bleeding through these seemingly impermeable barriers.

Employing reenactment, projection, and performed monologue, the entire piece was was staged inside a trio of sound effects studios in the Funkhaus in East Berlin, previously the broadcast headquarters for the GDR state radio and was once used to broadcast propaganda throughout the Eastern Bloc and over the Berlin Wall.

Lawrence Abu Hamdan (b.1985, Jordan) is an artist and audio investigator based in Beirut, Lebanon. His background as a touring musician led him to develop a deep interest in sound and its intersection with politics, which has come to share his practice. His audio investigations have been used as evidence at the UK Asylum and Immigration Tribunal and as advocacy for organizations such as Amnesty International and Defense for Children International. The artist is affiliated with the Forensic Architecture department at Goldsmiths College London where he received his PhD in 2017. Abu Hamdan is the author of the artist book [inaudible]: A Politics of Listening in 4 Acts. Recent solo exhibitions include the Tate Modern, London (2018); Hammer Museum, Los Angeles (2018); Portikus, Frankfurt (2016); Van Abbemuseum, Eindhoven (2014) and The Showroom, London (2012).

In 2019, Abu Hamdan was nominated with three fellow finalists for Britain’s most prestigious award in the visual arts, the Turner Prize. Based on the nominees’ mutual assessment of one another’s  work as very different but equally politically important, Abu Hamdan and his three fellow finalists petitioned the award committee not to select a single winner in the name of “commonality, multiplicity and solidarity.” The committee accepted this request, and the 2019 Turner Prize was jointly awarded for the first time ever.