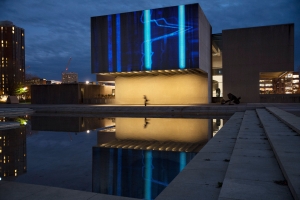 In response to concerns around COVID-19 and in accordance with a directive issued Tuesday, March 10, 2020, by Syracuse University’s Chancellor and President, Kent Syverud, Urban Video Project, a member of the Coalition of Museum and Art Centers (CMAC) at Syracuse University, will cancel all scheduled receptions and artist talks from Friday, March 13 through Monday, March 30, 2020.

In this screening and talk, filmmaker Ana Naomi de Sousa will discuss her experience as a research fellow with Forensic Architecture working on the Saydnaya project, which used “ear-witness” testimony of survivors of Syria’s infamous Saydnaya prison to reconstruct its architecture.

Only a blurry satellite image of the prison exists and few prisoners survive. Those who do describe a “regime of silence,” under which prisoners are not allowed to speak or scream when tortured and become highly attuned to even the subtlest sounds, amplified or attenuated by the building’s unusual acoustics.

The lecture will be accompanied by screenings, including excerpts from Saydnaya (2016) and Lawrence Abu Hamdan’s Walled Unwalled (2018).

This event is held in conjunction with the exhibition Lawerence Abu Hamdan: Walled Unwalled, which Light Work UVP will project on the Everson Museum facade Februrary 13 – March 28, 2020 every Thursday through Saturday from dusk to 11pm.

About the Guest Speaker

Ana Naomi de Sousa is an award-winning documentary filmmaker and writer whose work addresses history, spatial politics and identity. Her documentaries include The Architecture of Violence (2013), Angola – Birth of a Movement (2012), and Hacking Madrid (2015). As a collaborator with Forensic Architecture, she was the filmmaker on the 2016 Saydnaya project. She has written for The Funambulist, The Guardian and Al Jazeera English, among others. Her latest short, about a rainforest conservation project led by women in Ecuador, aired on Al Jazeera English in February 2020 as part of the Women Make Science series. More info

CART services will be provided for the talk. To make accommodation requests or ask questions about facilities, please contact info@urbanvideoproject.com or 315-443-1369.

This event is co-presented with the Syracuse University School of Architecture; College of Visual and Performing Arts Department of Transmedia;  S.I. Newhouse School of Public Communications and the Television, Radio & Film department in Newhouse; Dan Pacheco, the Peter A. Horvitz Endowed Chair in Journalism Innovation at Newhouse; and The Canary Lab at Syracuse University.

It was made possible through the generous support of the Syracuse University Humanities Center as part of the official program for Syracuse Symposium 2019-20: Silence.

Program Notes: The Eyeslicer Presents: “Marlon said to me, ‘Maria,...