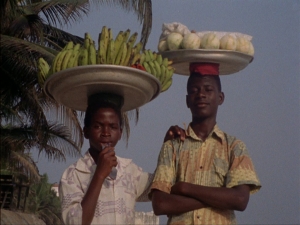 BE SAFE: MASK UP AND SOCIAL DISTANCE — Exhibition patrons visiting the Everson Plaza must maintain a social distance of at least 6 feet between individuals at all times, except for groups visiting from the same household. We encourage everyone to wear face masks to safeguard the public health and as an extension of our commitment to help flatten the COVID Curve. UVP limits attendance at all screenings to 50 people to adhere to Onondaga County’s latest social distancing guidelines.

This will be the first exhibition at our exhibition site utilizing our entirely new, state-of-the-art projection system.

In conjunction with the exhibition, Asili will present a special remote screening of The Diaspora Suite, a series of five short films exploring the echoes and resonances of the African diaspora on Thursday, October 15 at 6:30pm.

Fluid Frontiers is the fifth and final film in the series entitled The Diaspora Suite, exploring Asili’s personal relationship to the African Diaspora. Shot along the Detroit River, Fluid Frontiers explores the relationship between concepts of resistance and liberation, exemplified by the Underground Railroad, Broadside Press, and artworks of local Detroit Artists. All of the poems are read from original copies of Broadside Press publications by natives of the Detroit/Windsor region, and were shot without rehearsal.

My Southside and City: 2020 Contest Selections
Scroll to top