(click the blue button at the top of the page) 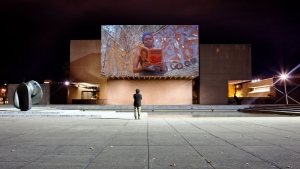 TO VIEW: click the blue button above to view the stream

A moderated Q&A with Asili will follow the screening. The audience can submit questions through live chat.

Made over the course of seven years and shot on 16mm in Brazil, Canada, Ethiopia, Ghana, Jamaica, and the United States, this revelatory cycle of five short films collapses time and space to reveal the hidden resonances that connect the black American experience to the greater African diaspora. Encompassing history, politics, music, dance, poetry, and ritual, The Diaspora Suite is by turns playful, surprising, moving, and a radical interrogation of colonialism’s legacy in its construction of a one-of-a-kind, global vision of pan-African identity.

This event will be entirely remote.

In addition to the live stream screening, viewers will also be able to view the individual films asynchronously through buttons at the top of this page from Friday, October 16 to Monday, October 19.

The archived Q&A portion of the event will continue to be available through the button at the top of this page after the live stream event has ended.

Photographed on location in Harlem and various locations throughout Ethiopia, the film shifts between the first person account of a filmmaker, the third person experience of a man navigating the streets of Harlem, and day-to-day life in the cities and villages of Ethiopia.

Filmed on location in Salvador, Brazil (the last city in the Western Hemisphere to outlaw slavery) and Harlem, New York (an international stronghold of the African diaspora), Many Thousands Gone draws parallels between a summer afternoon on the streets of the two cities. A silent version of the film was given to jazz multi-instrumentalist Joe McPhee to use as an interpretive score. The final film is the combination of the images and McPhee’s real time “light reading” of the score.

The fourth film in an ongoing series of 16mm films exploring Asili’s relationship to the African diaspora, this one was shot in Hudson, NY and Accompong, Jamaica. Accompong was founded in 1739 after rebel slaves and their descendants fought a protracted war with the British, leading to the establishment of a treaty between the two sides. Cudjoe, a leader of the Maroons, is said to have united the Maroons in their fight for autonomy under the Kindah Tree—a large, ancient mango tree that is still standing. The tree symbolizes the kinship of the community on its common land.

The fifth and final film in an ongoing series exploring Asili’s personal relationship to the African diaspora. Shot along the Detroit River border region, Fluid Frontiers explores the relationship between concepts of resistance and liberation exemplified by the Underground Railroad (the Detroit River being a major terminal point), and more modern resistance and liberation movements represented by Dudley Randall’s Detroit-based Broadside Press, as well as the installation, sculptural, and performance works of local Detroit artists.

Captioning services for the Q&A are available on request and may be available for some of the films in the program.  Please contact with requests no later than September 15. Please contact info@urbanvideoproject.com for more information.